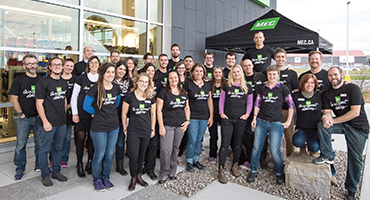 NOW more than ever, retailers and retail land­lords in Canada are strengthening partnerships and enhancing community involvement to give back and elevate brand perception. How­ever, doing it thoughtfully and meaningfully is important, according to industry experts. For companies involved, community involvement can be especially beneficial to build brand awareness and goodwill while at the same time attracting, retaining and engaging employees.

There are many examples of such partner­ships that range from financial contributions to ‘volunteer days’ to events with local commun­ities. While such endeavours have been present for years, retailers and landlords are now be­coming more strategic in their involvement.

Montreal-based retail strategy consultant Carl Boutet explained how companies can benefit from embracing community involvement, includ­ing connecting with customers beyond simply selling products and transactions. Engaging with the community can create a sense of purpose for retailers as well as their employees, and plays a significant role in differentiating brands, he said. As a bonus, community involvement initiatives “make for good content and storytelling.”

Staying close to the customer

For smaller retailers, community involve­ment allows them to remain close to their target markets while, in some cases, engaging with customers on a non-retail level. Sponsoring a children’s baseball team is an example, where a customer’s child could be involved.

Edmonton-based footwear and accessory re­tailer Poppy Barley, for example, donates 1 per cent of its sales to communities in Canada and Mexico as part of its company-wide sustainabil­ity initiative. In the first quarter of 2019, the re­tailer partnered with the Mazankowski Alberta Heart Institute—Poppy Barley diversifies its charitable deeds to help various entities, while keeping things fresh for all involved. This year, Retail Council of Canada (RCC) recognized Poppy Barley with the Independent Retail Am­bassador of the Year Award at the association’s annual STORE Conference, partly due to the company’s good work in the community as part of the brand’s continued growth.

Carl Boutet explained how brands such as Poppy Barley are creating a level of engage­ment that allows its marketers “to have a deeper and more meaningful relationship with its cus­tomers”. With that “comes a sense of commun­ity and belonging” that is critical at a time of intense competition in the footwear market and within the Canadian retail industry in general.

Larger retailers are also connecting with com­munities to foster engagement. One great ex­ample is MEC, which has mastered the concept of community involvement with an expansive offering of activities and grants that help the community and enhance overall brand aware­ness for MEC itself.

Since its founding in 1971, MEC has invested a whopping $41 million into non-profit organ­izations that support outdoor recreation and conservation. MEC has become one of the top retailers in the country when it comes to com­munity support funding with a percentage of sales being dedicated to various causes.

Tying-in a brand’s identity to community work creates synergies, according to Boutet, which helps differentiate the brand while “making for good content and storytelling,” he said. Com­munity building reflecting the retailer’s core business and value proposition are critical to success. Such initiatives come at an important time for MEC, which is seeing unprecedented competition from homegrown retailers such as Sport Chek as well as French Behemoth Decath­lon, which is launching an aggressive Canadian expansion with a retail format similar to MEC in terms of store sizes and offerings. Decathlon has its own extensive community initiatives that will be rolled out across Canada over the next few years as the company expands.

There are several other excellent examples of retailers in Canada engaging in community in­volvement which create a ‘win-win’ situation for all involved. Best Buy Canada, for example, is known for its community endeavours – so much so that the company’s President, Ron Wilson, was named the recipient of the prestigious 2019 Dis­tinguished Canadian Retailer of the Year Award by RCC. Under Wilson’s leadership, the company has channeled over $5 million through its com­munity programs that include Geek Squad Acad­emy workshops, school technology grants and a relationship with the Boys and Girls Club.

Focusing on technology to educate young Canadians is a smart move by Best Buy, which is known to be a market leader in various tech-related categories. Further adding to Best Buy Canada’s relevant community involvement is its commitment to reducing e-waste by offer­ing free recycling services at all its stores.

Home Hardware, known to be the ‘home of the handyman’, sponsors three large and important charitable organizations that help people in all parts of the community. Home Hardware ex­plains its community initiatives as having an emphasis on children and the environment. The retailer’s national charities include the SickKids Foundation, Tree Canada Foundation and the Special Olympics.

Home Hardware says that these charities help to enhance the retailer’s already highly recogniz­able brand, not to mention solidify the new and unique Home Hardware positioning “Home­owners helping homeowners”. Ultimately, the goal is to help those in need while also create enhanced brand value for Home Hardware itself.

Yet another example is Ottawa-based retailer Lee Valley Tools, known as a go-to place for ‘mak­ers’. The company teamed up with International Sustainability Education Foundation (ISEF) for Canada’s 150th birthday to bring paddle carving to as many people as possible. As part of the in­itiative, 25 per cent of the net proceeds of paddle carving kits purchased at Lee Valley were do­nated to ISEF. The campaign was a remarkable success and helped solidify Lee Valley’s overall brand perception in the eyes of consumers as well as its employees.

Landlord Oxford Properties has built bee­hives on the roofs of its shopping centres and commercial buildings in Canada, for example, including its first at Hillcrest Mall in Richmond Hill, north of Toronto. That colony alone is home to more than 70,000 bees. The landlord collects honey and sells it in the malls, with proceeds of sales going to help support the increased col­onization of the bee population which has been declining rapidly in recent years.

Lisa Resnic, Marketing Director and Specialty Leasing Manager at Hillcrest Mall, explained how the landlord’s beehive initiative had “driven a lot of goodwill towards the mall”. Hillcrest con­tinues to see revenue growth—the buzz isn’t just on the roof these days, she said. Oxford Proper­ties has expanded the beehive initiative by add­ing them to 20 of its properties (including shop­ping centres and office buildings).

Landlord Cadillac Fairview, which operates some of Canada’s most productive and popular shopping centres, also has extensive community involvement that ranges from dog parks to a massive Olympic sponsorship initiative.

At a local level, Cadillac Fairview recently donated $25,000 to Kitchener-Waterloo’s Grand River Hospital to help fund the founda­tion’s PROPEL initiative, dedicated to helping young people improve their mental health. This donation is the latest of Cadillac Fairview’s $600,000 investment towards its Youth Philanthropy program. On a national scale, in 2017 Cadillac Fairview partnered with the Can­adian Olympic Committee in an 11-year initiative aimed at growing and supporting the Olympic Movement in Canada.

Jason Anderson, Senior Vice-President of Marketing for Cadillac Fairview, explained that the Olympic partnership is the first time that a company in the commercial real estate industry has done such a deal. “This is completely consistent with our strategy over a period of years which is to focus on the best shopping centres and office buildings in Canada and make sure they stay that way through regu­lar investment. We spent over $4 billion in the last four years to do that,” said Anderson.

Landlord Ivanhoé Cambridge has donated more than $2.5 million over the past several years, including more than $500,000 donated to the United Way last year alone. The landlord has also been involved in extensive efforts to support humanitarian causes such as sup­port for homeless shelters and housing for people with disabilities, as well as cultural endeavours to protect and promote architectural heritage. Ivanhoé Cambridge also supports education that includes research and training in real estate, architecture, urban planning, retail and business schools.

What consumers, and employees, want

Why do retailers and landlords engage in such community initiatives? Studies show that a substantial percentage of the population ac­tually considers corporate social responsibility when deciding what services and products to buy, and from where, explained Boutet.

Employee engagement is another important factor, including attracting, retaining and en­gaging current and future staff. That’s accord­ing to Suzanne Sears, President of Best Retail Careers International and Founder of Retail Staffing Canada. This is especially important at a time when unemployment is at record lows in Canada, with many retailers struggling to find and retain employees as a result, she said. Sears explained further how studies show that more than 80 per cent of Generation Y work­ers value a company’s corporate responsibility program and would actually quit their jobs if these programs fell by the wayside.

“The younger generation is different in its ex­pectations, and many retailers have not adapted to their expectations,” she said. “It’s about at­tracting, retaining and engaging your employ­ees. Without that, you could lose staff to the com­petition. And the market for good employees is highly competitive in most parts of Canada”.

Community engagement brings employees together in a different light where they can get to know one another better and, as a result, can create stronger bonds that can translate into the work environment itself, she noted.

Sears explained how community and charit­able endeavours need to be in line with a re­tailer’s values, and it’s not enough to just col­lect money at a till. “You can send money to a charity all you want, but you have to make it meaningful as well as impactful, and it should be in relation to the brand.

Her sentiment is shared by industry expert Sylvain Charlebois of Dalhousie University, who said that about $35 million annually is raised by retailers collecting money at tills where con­sumers are making purchases. In reference to grocery retailers collecting money for charity at the till specifically, Charlebois said, “customers usually don’t get to choose the charity, and won’t get a tax de­duction. Most grocers won’t match the donation, either. So essentially, customers do most of the financial heavy lifting without the credit.”

He went on to reveal that surveys show that more than half of consumers disapprove of the practice and feel pressured to donate and do so often out of guilt. “Many people dislike the practice, given how little transparency is of­fered as to what happens to the money they are asked to donate.”

Transparency is key, said Suzanne Sears, as are partnerships. “You can attach commun­ity giving and charity to transparency. For ex­ample, if you’re building schools in Africa and are a shoe retailer, sending shoes to that com­munity would be an added bonus, and with ter­rific optics,” she said. “It’s no longer just enough to donate 2 per cent of proceeds to cancer. Cre­ating a sense of engagement will extend the tenure of employment”.

We’ll continue to see retailers and retail land­lords embrace community involvement through various initiatives as we move forward. But, when done right, the experts say that everyone can be a winner, including the companies in­volved, their staff, and of course the commun­ity that ultimately benefits from these corpor­ate partnerships.

What is voice-based e-Commerce?