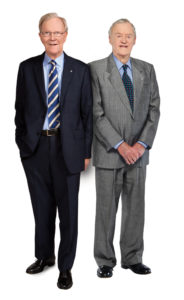 RCC’s Canadian Grand Prix Lifetime Achievement Award recognizes individuals or families who have demonstrated outstanding service and dedication to the Canadian retail and grocery industries. Recipients reflect the industry’s spirit of community and trust. They have demonstrated a lifelong commitment to their company’s growth and innovation, to the communities they serve and to philanthropy.

The Sobeys grocery business began modestly in 1907 in Stellarton, Nova Scotia when J. W. Sobey started delivering meat with a horse-drawn cart. While Sobeys has seen extraordinary growth over the past century, it owes its success to its core values, local focus, deep connection to community and commitment to the customer.

J.W.’s son, Frank H. Sobey, along with his brother Harold, imparted the importance of values and high principles which David, Donald and their late brother Bill carried with them all these years. Over five generations of family members have been actively engaged in building Sobeys into a national supermarket chain and one of the most respected and admired employers in Canada.

Since the company’s inception over 112 years ago, the Sobey Family has fostered a culture of philanthropy and community engagement throughout Empire Company Limited and its employees. They have been tireless promoters of post-secondary education, advancements in health care, and the visual arts in Canada.

“RCC is honoured to recognize the Sobey Family with the 2019 Grocery Industry Lifetime Achievement Award,” said Diane J. Brisebois, President and CEO, Retail Council of Canada. “The Family has played significant roles in the growth of the company, showing exceptional and relentless passion to serve their customers, their employees and the community at large.”

The Sobey Family joins a distinguished list of past recipients from across Canada that includes: Mother Parkers Tea & Coffee Co-Chairmen, Paul Higgins Jr. and Michael Higgins, Longo’s President and CEO Anthony Longo and the Longo Family, as well as Cindy and Tina Lee of T&T Supermarkets.

The Lifetime Achievement Award will be presented to David and Donald Sobey and The Sobey Family at Retail Council of Canada’s Canadian Grand Prix New Product Awards Gala on May 29, 2019 at the Toronto Congress Centre, from 5:00 pm to 8:00 pm ET. For more information and to reserve tickets, visit www.rccgrandprix.ca/gala-tickets

The Canadian Grand Prix New Product Awards Gala will close the second day of Canada’s biggest retail conference, STORE2019. Media are also invited to attend STORE 2019, from May 28 to May 29, 2019. For more information and to purchase tickets, visit www.storeconference.ca/tickets.

Proudly Canadian, with headquarters in Stellarton, Nova Scotia, Sobeys has been serving the food shopping needs of Canadians since 1907. A wholly-owned subsidiary of Empire Company Limited (TSX: EMP.A), Sobeys owns or franchises approximately 1,500 stores in all 10 provinces under retail banners that include Sobeys, Safeway, IGA, Foodland, FreshCo, Farm Boy, Thrifty Foods and Lawtons Drug Stores as well as more than 350 retail fuel locations. Sobeys, its franchisees, and affiliates employ more than 125,000 people. More information on Sobeys Inc. can be found at www.sobeyscorporate.com.

Retail is Canada’s largest private sector employer with over 2.1 million Canadians working in our industry. The sector annually generates over $76 billion in wages and employee benefits. Core retail sales (excluding vehicles and gasoline) were $375 billion in 2018. Retail Council of Canada (RCC) members represent more than two-thirds of core retail sales in the country. RCC is a not-for-profit industry-funded association that represents small, medium and large retail businesses in every community across the country. As the Voice of Retail™ in Canada, we proudly represent more than 45,000 storefronts in all retail formats, including department, grocery, specialty, discount, independent retailers and online merchants. RetailCouncil.org