In light of today’s evolving consumer, some grocers are shrinking to cater to their needs

Things have changed considerably in a world of changing consumer tastes and budgets, new competitive formats, and shifting demographics and shopping patterns.

Whether consumers are demanding organic or ethnic offerings, pickup and delivery services, or deep discounts, grocery stores can no longer be all things to all people.

For some, it’s enough to be one, depending on the shoppers they choose to serve.

According to a September 2018 IBISWorld report, Supermarkets & Grocery Stores in Canada, supermarkets and grocery stores are increasingly having to compete with alternative retailers, including convenience stores, supercentres and warehouse clubs. Consumers for their part are purchasing their groceries at different retail channels.

Major stores are trying to reformat and remodel their locations in an effort to increase and/or diversify their high-quality offerings. “It’s a way for them to differentiate themselves from the main competition of supercentres and warehouses where they sell items in bulk,” says industry research analyst Olivia Ross at IBISWorld and author of the report.

While grocery stores can’t replicate the one-stop shopping experience of a Walmart or Costco, major stores have been aggressive in diversifying through acquisition, says Michael Von Massow, food economist at the University of Guelph’s Food Agriculture and Resource Economics department. Loblaw acquiring Shoppers Drug Mart is a case in point. “It’s all about the convenience factor. If a store can give you as much as possible in one shop, it can help build your basket. If you need Tylenol, shampoo, and bananas today, you can either go to Shoppers or Loblaw.”

Ross notes a particularly strong area of focus is increasing the selection of organic products. The Canada Organic Trade Association, in fact, reports that the market for organic food products has tripled since 2006. Today, 45 per cent of all organic food and beverage sales occur in traditional grocery stores.

Demand for ethnic foods is also expected to increase, providing another opportunity for grocery stores to stay competitive, her report states. In addition, generic and private label products continue to gain ground as they offer higher profit margins than branded products.

A significant shift in overall thinking is needed, says Von Massow. “Grocery is not a high margin business, so the driver of profitability is the size of the basket. How much people pay as they walk through the door is critically important in driving strategic changes.

As such, the supermarket/grocery store category is moving towards compartmentalization as a means to simplify choice, he says. “This allows them to cater to a broader range of customer preferences and make it easier for them to find what they want. If you go to a condiment aisle you might see 40 different types of mustard. Shoppers are getting overwhelmed by choices, and would rather have sections based on consumer type, such as healthy foods, or international/ethnic foods, where they can easily find specific things they need.”

Von Massow adds that lines are blurring between retail and foodservice within stores. “We’re seeing more and more meal kits and grab and go options in grocery stores. Typically, they’re at the front so people can come in and get out quickly.”

Major chains are also investing in innovation to enhance the experience, says Maureen Atkinson, senior partner at JC Williams Group in Toronto. “Some of what make things easier and more efficient are not as evident to a consumer. They’re more on the functional side. A lot has to do with online ordering, pickup and delivery, and things like that.”

Coppa’s Fresh Market has been a family-run grocery operation for 55 years. Since starting operations in 1963, it has expanded to four large format grocery locations in the Greater Toronto Area. 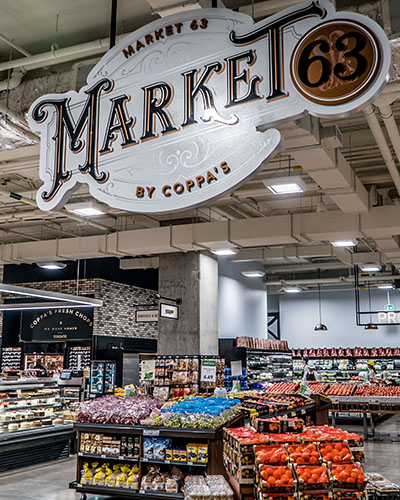 Now it is taking on the downtown market with an entirely new concept called Market 63 in the heart of Toronto’s Financial District.

According to Andrew Gabriele, director of e-Commerce, Market63 by Coppa’s represents a dramatic change for the business. “Having a downtown store for our brand identity has always had an allure for us. With larger stores, basket sizes are getting smaller, so grocers need to change that a bit.”

As Gabriele notes, “Things are changing in our industry, so we didn’t want to keep doing things the same way. We decided to try a smaller format concept that speaks to millennials in the downtown core where people are looking for different experiences.”

The format is definitely a departure from the norm. The 20,000 sq. ft. space is one-quarter the size of other Coppa’s locations. To reduce the number of aisles, they cut back substantially on grocery and frozen products. In fact, those categories are the smallest part of the new store, Gabriele explains. “Freezer space is a big challenge in a small format. We simply couldn’t have three lanes of freezers packed with food.”

The store has maintained a sizeable footprint for produce, as well as high-end meat and fish, most of which are organic. The market has its own butcher shop, deli, and bakery, as well as a standalone café and a flower shop.

To appeal to its urban audience, the main focus is on ready foods, much of which is produced at the family’s Nonna Francesca restaurant kitchen and shipped fresh every day. “We went really big on the hot food part.”

While it’s still early days (it officially launched in February of this year), Gabriele says they are working on partnerships with well-known local chefs and specialty bakers to create unique meal kits and food boxes.

“It was time for us to do something new, and we did,” Gabriele says. “This one is special.”

The appeal of the specialty store

The rise of the specialty store is becoming a growing competitive force as they can offer a compelling proposition for consumers interested in specific product categories. 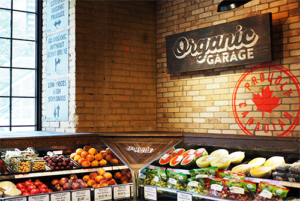 “Shoppers will often buy grocery staples from a superstore, and then go to specialty stores for specific ingredients they want,” Von Massow says. “They’re happy to go to that specialty store because they know they can’t get everything they want at Costco or Walmart.”

Bulk stores, for example, do a good job of meeting demand for price-conscious consumers who prefer to reduce packaging and cook from scratch. Others who may insist on fresh ingredients for their dinners will shop at a favourite specialty store every two to three days.

Matt Lurie, founder and president of Organic Garage has been specializing in organic produce since opening its first store in Oakville in 2006.  It now has three additional stores in Toronto, with more planned.

Lurie says product selection is the same across all stores. “We have always been focused on affordability and made sure we have the most aggressive pricing to compete with the chains.”

The growing demand for organic and healthy foods has helped stores like his compete even more aggressively against the likes of Whole Foods, which has struggled of late. “Their [premium pricing for service] model worked ten years ago when people were learning about healthy foods,” Lurie explains. “Then it was: what is quinoa and what do I do with it, and why is it good for me? Now it’s: where is it and how much does it cost?”

Even though larger stores are also increasing their organic selection, Lurie contends it attracts shoppers wanting to try organic. “Chain stores whet the appetite for customers but can’t fully satiate their interest in organic and natural products. We have the same varieties as the chains, but also much more and at significantly less cost, so converting them to our stores is easy.”

Downsizing for the urban market

Organic Garage’s push into a more densely populated area is part of another growing trend: reaching the urban consumer. But the challenges of operating in those markets is significant, particularly in terms of real estate, Lurie says.

“About 12 or 15 years ago, all chains wanted to get out of the city. With the population density they’re coming back in. But you can’t open 60,000 or 80,000 sq. ft. stores. You have to develop a smaller footprint and format. We’ve always been good at utilizing square footage because we don’t’ require immense back rooms for prep work.”

Grocery store formats in large urban centres, where fewer people have cars and tend to shop more frequently, are a breed unto themselves. “It’s more like the European market model,” Von Massow says. “Urban stores have to be very specific. Some will stock stuff at the face of the store differently in the morning, then at lunchtime, and then the end of the day”

Urban grocery stores have to keep inventory low to reduce operational costs because they simply don’t have the economies of scale of a larger space, Ross notes. “Consumers who go to those types of stores are not expecting to get the whole shopping experience in one go.”

“It is challenging to make money on those stores,” confirms Atkinson. “Consumers won’t be doing that $200 shop they would do in the suburbs. But the stores know they have to be where the customer is. If they don’t, a competitor will be. Longo’s has mastered that somewhat better than others. The productivity in those stores is unbelievable. They produce very high sales per square foot.”

Whatever the format, there are two things grocers always need to focus on, Von Massow notes. “The need to get customers in the store and make it easy for them to get what they want.”