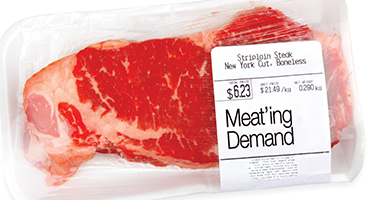 BASED on reports in the media, it would be easy to assume that the meat industry in Canada is in trouble. Media reports regarding meat demand highlight the growth of plant-based meat substitutes. There is also a steady flow of articles and broadcasts about meat’s negative impact on the environment; concerns about animal welfare; and of how millennials are turning vegan. There are often stories associating meat with one health concern or another. And, the Federal Government’s new Food Guide says that, “Among protein foods, consume plant-based more often.”

Recent reports might suggest a decline among Canadians’ demand for meat. However, reality in total basket at grocery checkout says otherwise.

To top it off, the National Post reported in a March 11, 2019 article that “According to a survey conducted by Dalhousie University and the University of Guelph… 6.5 million Canadians—nearly 20 per cent of the population (up from 6.4 million in October 2018)—are either limiting the amount of meat they eat (the so-called flexitarian diet) or cutting it out entirely.”

All those reports and data might make retailers stop and think about their meat programs. But, before grocers turn the meat case over to bean sprouts and broccoli, there is another side of the meat and poultry demand story.

Let’s recall that there are three main reasons that grocers have a meat department. First of all, it serves and meets a consumer demand. Secondly, the meat department contributes to the overall grocer’s and the individual store’s quality image. An attractive meat department with high quality offerings provides a positive reflection on the entire operation. Even discount banners such as Freshco, Food Basics and No Frills rely on meat to enhance their value proposition. Costco has long prided itself on its AAA Beef program. Finally, it is widely known that if there is a meat item in the basket, there is going to be plenty of other items that are going to be run through the cash. In other words, meat makes for a bigger ring.

According to the Statistics Canada Household Spending Survey, meat comprises 19 per cent of the total basket of food purchased from stores. The StatsCan survey data shows that it is the largest category in the store other than the total of the packaged goods residing in the vast swath of the middle of the store aisles. Furthermore, the meat share is growing. The share in 2010 amounted to 18 per cent. And while StatsCan has not yet published 2018 values, I estimate it at 19 per cent.

Not only is it the largest category for grocers, but it more than carries its weight for them. As noted, if there is a fresh meat item in the cart, there is going to be plenty of items from the rest of the store too. Every grocer knows that, which is why on the big holiday weekends, meat dominates the front page of the flyers. Watch the flyers for the first big holiday weekend of the 2019 spring/summer season. The Victoria Day flyer front pages will be jam packed with ribs, strips, grinds, breasts and a smattering of hot dogs. The prices will be very aggressive and designed to drive traffic to “win” the weekend for the banner, too. No other items are ever as prominent as meat, notwithstanding anything the government Food Guide might fret about.

It’s all about consumption

Another hint about the importance of meat is to watch what happens when prices increase. I am primarily known as a livestock and meat market analyst. When meat prices rise dramatically, as they did in 2014 and 2015, I receive a great deal of calls from the media asking about the causes and what consumers can expect to pay in the future. When bacon prices rise sharply it is like a national crisis. No other commodity gets that kind of interest from the media. It is because they know it is important to consumers.

While the year-over-year increases in meat prices have eased the last few years, the overall price levels are still high. Despite this, consumers are still eating as much or more as they did prior to the increases. That combination of price and consumption is a measure of overall meat demand. In other words, demand is more than just how much we eat, it is how much we eat and at what price. I have tabulated a Canadian meat demand index which combines total meat and poultry consumption with the deflated Consumer Price Index. Based on that measure, it can be stated that meat demand in the last four years was stronger than at any time since 2000.

The improvement in meat demand has been caused by many factors, including something as simple as the popularity of pulled pork. Other factors, such as the increased awareness of the importance of protein in the diet, and the publicity of research that questions the negative health impacts of animal fats has helped, are likely drivers.

If this is an industry in trouble, then I bet meat packers and processors would take another four or five years of this kind of trouble. The best thing for grocers is to keep a well-stocked, competitively priced meat case, and watch the sales grow throughout the entire store.

Kevin Grier is President and Founder of Kevin Grier Market Analysis and Consulting Inc. and is a regular contributor and sought out expert to the media, including Globe and Mail, National Post, CBC Radio, Canada AM, Global News, and CTV.