The CSCA Retail 100, created by the Centre for the Study of Commercial Activity at Ryerson University, brings you the top 100 retail organizations operating in Canada as ranked by total estimated annual retail sales in fiscal 2018/2019. 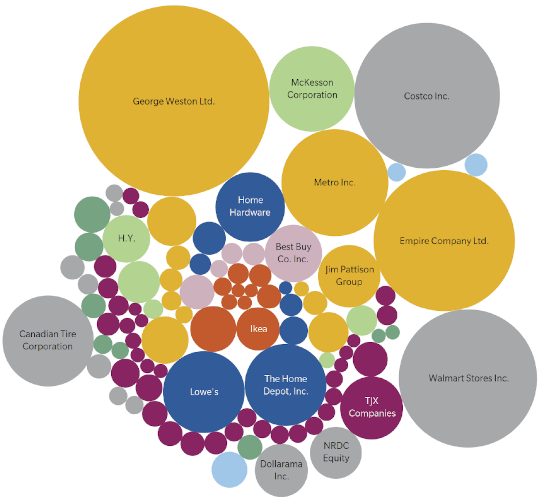 By Maurice Yeates and Tony Hernandez

CSCA’s Retail 100 listing has been augmented this year with a breakdown provided for both Retail Conglomerates (RCG) and the Retail Chains (RCH) that they control. A detailed understanding of this upper tier of retailers in Canada is important as these are organizations whose economies of scale allow them to exert a significant influence on Canada’s retail environment. The top 100 retail conglomerates account for close to 70 per cent of non-automotive retail sales in Canada in 2018, declining from 71.4 per cent in 2014. Considering the control they exert, understanding the marketing strategies and positioning that these top 100 retail players adopt provides insights into the ongoing processes that are continuously shaping Canada’s retail economy.

A few large store-based conglomerates effectively control a large proportion of the current Canadian non-auto retail sales environment. Our latest data shows that this long-standing trend has continued apace. In 2018, the ten largest conglomerates controlled 48 per cent of national retail sales, increasing from 43 per cent in 2014.

Store closures and merger/acquisition activities have resulted in some major changes in the RCG100 listing over time. For example, seven conglomerate closures occurred between 2014 and 2018, involving $6.6b sales, of which Sears ($4.2b) and Target ($1.3b) were by far the largest. Mergers and acquisitions amongst ten conglomerates impacted $37.3b in sales, centred on four of the largest conglomerates in 2018 (Weston, Empire, Metro and McKesson).

While the level of domination by the ten largest chains is about same for both 2014 and 2018, the 100 largest chains in 2014 contributed a greater share of national sales (65 per cent) than those in 2018. Thus, the difference in contribution to national sales between 2014 and 2018 is related to sales in chains ranked between 25th and 100th. Canadian headquartered chains contributed 6.4 percentage points less to the 2018 total than in 2014, while the contribution of chains headquartered in the US increased by 5.5 percentage points and from elsewhere in the world by 0.9 percentage points.

Based on Environics Analytics’ ClickSpend data, it is estimated that the amount of online activity in 2018 in household expenditures for the main groups of retail – entertainment, electronics, clothing/shoes/children, sports & leisure, furniture & household, health & personal care, groceries/food/alcohol were $35.3b (i.e., 11.6 per cent of expenditures in these categories were spent online).

The highest shares of ‘online’ expenditure were in entertainment (30 per cent) and electronics (28 per cent). The lowest shares were in groceries/food/alcohol (less than 5 per cent). The ‘elephants’ in this non-auto retail sales ‘room’ are, of course, online e-retail activity – including pure-play (particularly via Amazon), direct-to-consumer (DtC) along with other eCommerce platforms. For example, Amazon’s estimated sales in Canada in 2018 were C$16.6b, which would place it as the 5th largest ‘retail conglomerate’ in the country! While the CSCA Retail 100 captures some of the online activities through store-based sales reporting of the retail conglomerates and their chains, much of the burgeoning e-retail sales are either not systematically reported or not reported at all. This remains an area in need of more data and research.

For more information concerning the CSCA Retail Top 100, or to download a full version of the report, visit the CSCA website.