Retail Council of Canada (RCC) is excited to select Poppy Barley as the winner of the Excellence in Retailing Awards (ERA) 2019 Independent Retail Ambassador of the Year.

RCC’s Independent Retail Ambassador of the Year Award recognizes the outstanding contributions of a local independent retailer. The recipient has distinguished itself as a visionary and innovator that has become an integral part of the community it serves.

Poppy Barley, an independent Canadian retailer founded by sisters Kendall and Justine Barber, is the first North American company to bring the craftsmanship of traditional footwear industry to a socially conscious world. They are part of a growing community of retailers in Canada who are proving that treating people well, the planet respectfully and developing outstanding products that are accessibly priced is the new recipe for a successful business. 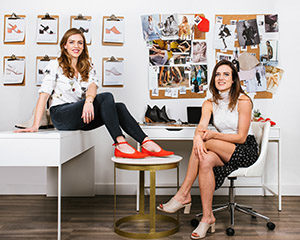 “Poppy Barley has been able to achieve the perfect balance between offering consumers the highest quality craftsmanship, fashion and comfort in footwear at approachable prices while also being 100 per cent committed to ethical sourcing,” said Diane J. Brisebois, President and CEO, Retail Council of Canada. “Within a couple of months of launching their ecommerce business in 2012, they opened strategic pop-up stores across Canada.  In 2017 they opened their flagship store in Edmonton and in April 2019 opened another retail store in Calgary.”

“Our vision was to design shoes for kick-ass men and women who always show up and don’t have time for sore feet” said Justine Barber, co-founder of Poppy Barley, adding “We wanted our customers to feel great both in our shoes and about who made them.”

“As much as we tried to focus our efforts online, our customers routinely and repetitively showed they wanted to shop in person, even if they were going to buy online,” recalls Kendall, co-founder of Poppy Barley.

The Independent Retail Ambassador of the Year Award will be presented to Poppy Barley at Retail Council of Canada’s Excellence in Retailing Awards Gala on May 28, 2019 at the Toronto Congress Centre from 5:30 p.m. to 8:30 p.m. ET. To purchase tickets for the gala, visit www.retailawards.ca/gala-tickets.

The Excellence in Retailing Awards Gala will close the first day of STORE 2019, which is Canada’s biggest retail conference, and will feature more than 70 speakers and attract more than 2,000 retail leaders from across North America. Media are also invited to attend STORE 2019, from May 28 to May 29, 2019. For more information and to purchase tickets to STORE 2019, visit www.storeconference.ca/tickets.

About Poppy and Barley

Poppy Barley is an independent retailer from Edmonton Alberta, founded by sisters Kendall and Justine Barber.  It brings the craftsmanship of traditional footwear industry to a socially conscious world.  The company screens factories, many of which are local, family-owned businesses in Leone Mexico, for positive working conditions, including fair wages and benefits, workers’ rights, health and safety.

Founders Kendall and Justine have also been recognized in their local community for a multitude of other accomplishments and initiatives including: Avenue magazine’s 2014 Top 40 Under 40,  Western Living’s “Ones to Watch”,  round up at the 2014 Designers of the Year Awards, and Global Edmonton’s Women of Vision, as well as being honoured with the University of Alberta’s Alumni Innovation Award.

Retail is Canada’s largest private sector employer with over 2.1 million Canadians working in our industry. The sector annually generates over $76 billion in wages and employee benefits. Core retail sales (excluding vehicles and gasoline) were $375 billion in 2018. Retail Council of Canada (RCC) members represent more than two-thirds of core retail sales in the country. RCC is a not-for-profit industry-funded association that represents small, medium and large retail businesses in every community across the country. As The Voice of Retail™ in Canada, we proudly represent more than 45,000 storefronts in all retail formats, including department, grocery, specialty, discount, independent retailers and online merchants. RetailCouncil.org