BY CHRISTOPHER DANIEL AND TONY HERNANDEZ,
Centre for the Study of Commercial Activity 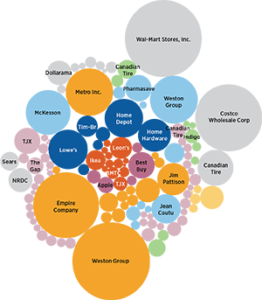 The CSCA Retail 100, created by the Centre for the Study of Commercial Activity at Ryerson University, brings you the top 100 retail conglomerates operating in Canada as ranked by total estimated annual retail sales in fiscal 2017. This report provides a detailed understanding of this upper tier of retailers in Canada – organizations whose economies of scale allow them to exert a significant influence on Canada’s retail economy.

The top 100 retail conglomerates in Canada collectively operated 424 retail chains, controlled $276 billion in total retail sales, and accounted for just over 75% of non-automotive retail sales in Canada in Fiscal 2017. The CSCA Retail 100 illustrates that the top conglomerates account for the majority of Canada’s retail economy. For example, the top three conglomerates (Weston Group, Wal-Mart Stores, Inc., and Costco Wholesale Corp.) account for 28% of total non-automotive retail sales in Canada. This illustrates that a significant share of Canada’s retail buying power is concentrated in the hands of a small number of very large retail organizations.

In addition to these top three conglomerates, there were a total of 33 organizations with at least one billion in total sales, and this ‘Billion Dollar Club’ accounted for 67%, or $246 billion, of non-automotive retail sales in Canada for 2017. These retailers also controlled a network of approximately 21,500 stores and accounted for almost 439 million square feet of retail store space. Overall, this Billion Dollar Club accounts for 89% of total CSCA Retail 100 sales, 67% of total Canadian non-automotive sales, and 42% of total Canadian retail sales in 2017.

There were several important changes in the 2017 rankings of the CSCA Retail 100. Some of the largest gains and losses in rank were primarily due to structural changes such as mergers and acquisitions, though many were due to actual gains or losses in reported or estimated performance.

The greatest increases in the Retail 100 ranks in 2017, were Bass Pro Inc (+40), Ashley Furniture Industries Inc. (+20), and Fairfax Financial Holdings Limited (+12). Bass Pro Inc. began talks to acquire Cabela’s in 2015 when Cabela’s announced it was considering a sale due to a flagging stock price and pressure from activist investors. Although close to a deal in late 2016, difficulties emerged in the form of stagnating performance at Cabela’s along with a regulatory hurdle in how to handle their credit card division. In September of 2017 Bass Pro announced it had agreed to acquire the company for $61.50 per share, down from $65.50 in October of 2016, valuing Cabela’s at approximately $4 billion. The acquisition almost doubles total sales for the conglomerate and rocketed Bass Pro Inc. from 77th in 2016 to 37th in 2017. Ashley Furniture Industries Inc. moved up in 2017 by 20 spots. Winnipeg based Dufresne Group, who operates Ashley Furniture stores in Canada under license, made plans in 2015 to greatly increase their store footprint by 16 stores, plans that were fulfilled in 2017 with the addition of 17 new stores. Fairfax Financial increased their ranking by 12 positions with their acquisition of the Canadian Toys R Us operations that were still profitable despite the misfortunes of the U.S. parent company.

Canadian controlled conglomerates accounted for 55.9% of the 2017 CSCA Retail 100 sales, a marked decrease from 57.9% in 2012 that is largely accounted for by the Lowe’s Companies Inc. acquisition of Rona Inc.’s Canadian operations. While other countries, mainly from Europe, did have a presence in Canada’s retail market, their market share in 2017 of 2.12% pales in comparison to the market share of Canadian and American firms. Debate concerning foreign control of Canadian retail sales continues to be centred on the presence of major U.S. retailers in Canada.

Data from the CSCA Retail 100 ranking reinforces a number of trends in the Canadian retail industry.