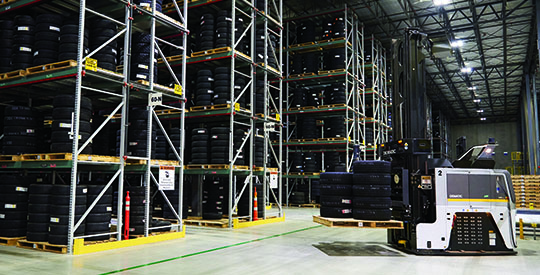 Boasting the largest supply chain network in Canada, Canadian Tire is innovating to continue meeting the expectations of its customers in every corner of the country

IT’S another busy day at Canadian Tire’s Bolton Distribution Centre (DC) in Caledon, Ont., and the minions are rushing. That’s the nickname DC staff gave to the (relatively) smaller, yellow version of the Automated Guided Vehicles (AGVs) that scurry about the floor. “They’re little bees,” says Steven van Roestel, VP, Toronto Operations. Which makes the 1.4 million square foot DC a massive hive, and as well-engineered as one, too.

Travel time kills productivity, says van Roestel. The AGVs are always on the move around the complex. Once shipments come to receiving, the AGVs pick up and deposit pallets in locations that support outbound order picking activities. There are 39 AGVs in all, including large ones that can go 42 feet high. They’re only part of the technology and systems that have made the DC, which opened in 2017, a model of efficiency.

The DC serves all of Canadian Tire’s retail locations of approximately 500 stores, and operates 20 hours a day, seven days a week. It handles over 10,000 SKUs, and specializes in bulk production, best characterized as the HALL products – heavy, awkward, large and long, including everything from lawnmowers to canoes, as well as non-conveyables like tires, lots and lots of tires – a rubber river of them, flowing in and out of the building every day. In addition, the DC features:
• An automated tire gantry receiving/picking/shipping system capable of processing up to 42,000 tires weekly.
• 5 kms of hanging platform conveyors.
• A 40-inch wide conveyor to move products that, because of their size, typically wouldn’t be conveyable.
• Five four-level pick modules, with spiral conveyors that can store approximately 5,000 unique products for order picking.
• The capacity to process 65 million outbound cubic volumes of shipments a year.

In every step of the supply chain, the emphasis is on faster turnarounds and greater accuracy. That’s important. But it’s only one of the objectives at the Bolton DC, says van Roestel. He focuses on three broad measurables: health and safety of the team; quality of customer orders; and shareholder value, which in this case translates into productivity. By every metric, “We’re seeing fantastic improvement,” he says.

The Bolton DC is located northwest of Toronto, on a plot of about 180 acres of land. It sits in the midst of major transportation corridors, including the 400-series highways, and is close to CP and CN intermodal terminals. The new DC replaced one in nearby Brampton, Ont., built in 1973. It served Canadian Tire well but was outdated. “You couldn’t buy a spare part,” says van Roestel. “To remain current with customer needs, today and tomorrow, we needed to change.”

Canadian Tire’s goal is to become the #1 retail brand in Canada by 2022. The Bolton DC is part of supporting this strategy. It’s separated into three warehouses to maximize facility efficiencies. There’s significant flex space, with room to grow and to also enable Canadian Tire to make adjustments as business needs change.

During the planning of the new DC, Canadian Tire consulted with over 70 vendors and partners. That, as much as internal supports and alignments, was critical to the success of the initiative, suggests van Roestel.

Engaging those outside entities allowed for quick problem-solving, new approaches and a DC design that works. For instance, the tire gantry system had been used before, but in a manufacturing setting. Canadian Tire worked closely with Cimcorp on tweaking the software for the system, to ensure it would perform for retail warehouse needs.

The AGVs can move and lift, but the magic there is in the software too. Again, that required advance work on coding and programming, to sync work and allow the machines to “think” through decisions, says van Roestel.

The new DC also required vendors to change the way they shipped products, as the AGVs operate with laser precision. That meant adjusting how tiers are arranged or offset, for example, or how goods are wrapped and tied, “All so everything could float through our system effectively,” says van Roestel. That took a year of vendor education.

About 800-1,000 people work at the Bolton DC, depending on peak seasons. Eight crews rotate through two shifts over the week.

WAREHOUSE OF THE FUTURE?

39
The number of Automated Guided Vehicles (AVGs) operating within the DC, which can reach heights in excess of 40 feet.

244
The number of docks at the Bolton DC: 122 for shipping product, and 122 for receiving product.

+500
The Bolton DC serves in excess of 500 Canadian Tire locations across the country, handling over 10,000 SKUs at any given time.

180 acres
The amount of land occupied by the Bolton DC.

Moving a mountain (of products)

Canadian Tire operates the largest supply chain network in Canada, with products sourced from 3,400 suppliers. Overall, the Bolton DC has the capacity to ship 100 million consumer units per year, or roughly 300,000 per day. Everything comes in and out of 244 dock doors: 122 for shipping and 122 for receiving.

Products are unloaded and received via the Warehouse Management System and placed on pallets in the conveyable building for pick up by the AGVs. Most receiving activities involve larger items that go directly to the forward picking location.

The area with the pick modules has a conveyor wide enough to accommodate largerbulk items, with smaller items placed in totes. Store orders then head to an automated sorting area for grouping into larger quantities, before heading to the shipping lanes.

DC operators use Vocollect voice technology to pick and process outbound orders. Then they go to the consolidation sorter area for processing and preparation, before moving to the destination shipping lane. Using voice picking headsets, operators are directed to pick product by store in a traditional racking area.

Just above the shipping docks, the hanging platform or mezzanine has the 5 kms of conveyor. That runs the length of the warehouse, delivering product from the pick module to a unit sorter. The platform is unique due to its size and its ability to handle tough Canadian weather conditions, including heavy snow.

From there, items head to a cross-belt sortation system, with designated chutes for each store. There are about 150 chutes and each store is assigned a light and a heavy chute. Operators use a handheld tablet and an RFID scanner at the end of the chutes to scan each item and place them on a pallet or cage. Once those are full, an AGV picks them up and transports them to the shipping docks.

One feature that van Roestel loves is what he calls a “dimensioner”. A photo eye takes a picture of any given box and calculates all of its dimensions as it travels across a fast-moving scale (40 cartons a minute). Each dimension can have its own variables, and if those exceed the tolerance the box is kicked to the exception lane. Staff can probe if and where an error occurred, so that they’re caught before the item gets out the door.

The Bolton DC aims to maximize efficiency in every way, and is LEED certified. There’s energy-efficient LED lighting throughout the building, as well as an integrated storm water management system.

For the lift trucks (i.e. non-AGVs), the DC is rolling out hydrogen batteries this year, with its own generation system. The team worked closely with Hyster (the forklift equipment company), Nuvera (the fuel cell company) and Next Hydrogen (experts in water electrolysis).

“We produce the hydrogen onsite to fuel the vehicles,” says van Roestel.

Because the Bolton DC is state of the art, van Roestel says it has set the bar for operations in general. “Internally, it’s become an innovation hub.”

Every day at this hub is also like a tire ballet. Tires are unloaded onto an extendable conveyor, which delivers them to the gantry system. Along the way, they pass by a camera scanner that reads the barcode label. Tires are directed to one of two lanes by SKU. They’re upstacked into totems using an overhead gantry robotic tool.

Inside the gantry, tools palletize tires that aren’t needed for immediate shipment, preparing them for storage. AGVs move the pallets of tires to be stored in VNA racking (very narrow aisle).

The same AGVs then bring tires from the storage racks to the gantry system for replenishment and picking of orders. There are approximately 9,700 pallet locations within this racking system. The gantry cranes select the appropriate SKU and quantity from within the system, and then lift the tires onto carts for shipment.

The entire process is a sign of the times. Around tires alone, the DC has eliminated nearly 80 per cent of manual labour and replaced that with machine moving. The benefits are not just around efficiencies in the supply chain, or health and safety, but around talent acquisition.

A dynamic setting that embraces new technology should be, if anything, a talent magnet, says van Roestel. Not many people yearn for backbreaking work, he says. But they are drawn to an environment filled with robotics and automation, the chance to be creative, a place where they can learn, improve and deliver exceptional service.

The DC provides a glimpse of that future, where crews keep tires and millions of other pieces of merchandise rolling along—a bright link in the supply chain.

“One of the things that keeps me up at night is being a talent destination,” van Roestel says. “We’re being asked to tour people and go to campuses. Canadian Tire is cool again and people want to work with us.”

THE RISE OF COBOTS

Rather than a scenario where robots take over the warehouse, industry tracker Supply Chain 24/7 describes synergies—automated systems perform repetitive, simple tasks (and a wider range of them), and people focus on the rest. The term for this collaboration is “cobot”, and Barclay’s figures that market will be worth $3.1 billion by 2020.

Earlier this year, Swisslog, a global firm specializing in automation solutions for warehouses and distribution centres, published a study called Planning for the Warehouse of the Future. It looked at the trends shaping distribution, and how a centre of the year 2030 might operate. Four of their key takeaways:

RCC calls for an affordability, inflation and impact lens to be applied to any proposed new tariffs